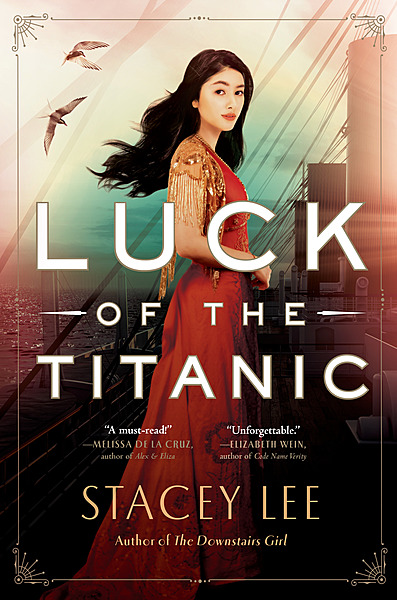 “Stacey Lee’s superpower is her ability to turn history’s forgotten into today’s unforgettable; and you’ll never forget the terror and joy of travelling with Valora Luck, whose unsinkable spirit gleams like a rescue flare through the icy murk of the past.” —Elizabeth Wein, #1 New York Times bestselling author of Code Name Verity

Luck of the Titanic

From the critically-acclaimed author of The Downstairs Girl comes the richly imagined story of Valora and Jamie Luck, twin British-Chinese acrobats traveling aboard the Titanic on its ill-fated maiden voyage.

Valora Luck has two things: a ticket for the biggest and most luxurious ocean liner in the world, and a dream of leaving England behind and making a life for herself as a circus performer in New York. Much to her surprise though, she's turned away at the gangway; apparently, Chinese aren't allowed into America.

But Val has to get on that ship. Her twin brother Jamie, who has spent two long years at sea, is there, as is an influential circus owner, whom Val hopes to audition for. Thankfully, there's not much a trained acrobat like Val can't overcome when she puts her mind to it.

As a stowaway, Val should keep her head down and stay out of sight. But the clock is ticking and she has just seven days as the ship makes its way across the Atlantic to find Jamie, perform for the circus owner, and convince him to help get them both into America.

Then one night the unthinkable happens, and suddenly Val's dreams of a new life are crushed under the weight of the only thing that matters: survival.

Stacey Lee is the critically acclaimed author of the novels The Downstairs Girl, Under a Painted Sky, and Outrun the Moon, the winner of the PEN Center USA Literary Award for Young Adult Fiction and the Asian/Pacific American Award for Literature. She is a fourth-generation Chinese American and a founding member of We Need Diverse Books. Born in Southern California, she graduated from UCLA and then got her law degree at UC Davis King Hall. She lives with her family outside San Francisco.

I have been a huge fan of absolutely anything and everything Stacey Lee writes. I love her Asian...

Five soggy, crying, messy and utterly devastated tears. Each time I think I know what I'm...

Warning, Spoilers Ahead First off, the cover of this book is beautiful. I was surprised on how...

I am so impressed! I had no idea there were non-white passengers aboard The Titanic, and to have...

I really enjoyed this first look and I'm looking forward to reading more! I loved the writing...

I've always been intrigued by movies and novels that take place during a historical event. ...