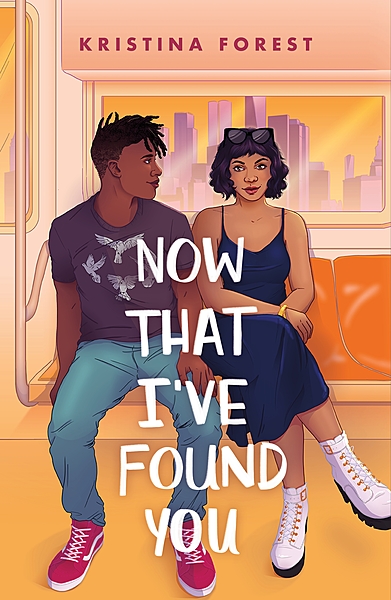 Part YA rom-com, part love letter to New York City, Kristina Forest’s new novel is about searching for fame, love, and answers in all the wrong places.

Now That I've Found You

Following in the footsteps of her überfamous grandma, eighteen-year-old Evie Jones is poised to be Hollywood’s next big star. That is until a close friend’s betrayal leads to her being blacklisted . . .

Fortunately, Evie knows just the thing to save her floundering career: a public appearance with America’s most beloved actress—her grandma Gigi, aka the Evelyn Conaway. The only problem? Gigi is a recluse who’s been out of the limelight for almost twenty years. Days before Evie plans to present her grandma with an honorary award in front of Hollywood’s elite, Gigi does the unthinkable: she disappears.

With time running out and her comeback on the line, Evie reluctantly enlists the help of the last person to see Gigi before she vanished: Milo Williams, a cute musician Evie isn’t sure she can trust. As Evie and Milo conduct a wild manhunt across New York City, romance and adventure abound while Evie makes some surprising discoveries about her grandma—and herself.

Kristina Forest was born and raised in Lawnside, New Jersey, a teeny tiny town that was also the first self-governing African American community north of the Mason-Dixon line. She attended Rowan University and majored in writing arts, and then earned an MFA in creative writing at the New School. Kristina works in children’s book publishing, and lives in Brooklyn, New York with two huge bookshelves.

#blackgirlmagic and adorable story in NYC

Disclaimer: I voluntarily read and reviewed an advanced copy of this book. All thoughts and...

A must read YA contemporary romance!

I loved Kristina's 2019 debut, I Wanna Be Where You Are, and was so excited for her sophomore...

I voluntarily read and reviewed an advanced reader's copy of this book in exchange for an honest...

This one has everything so far! A young starlet and her famous grandmother, an inrtiguing boy, a...

This sounds like just the book I need in my life!

One of my goals in 2020 is to read more rom-coms, and what could be more perfect than one that...

This looks exactly like my favorite kind of book!! I am such a sucker for a good romance! And i...