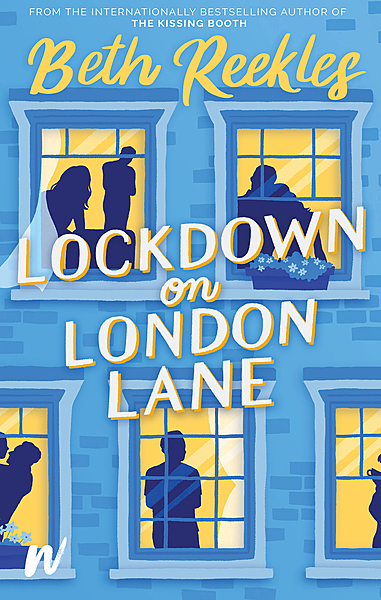 From the bestselling author of The Kissing Booth, comes a funny, charming novel about life and love during lockdown...

For the inhabitants of London Lane, a simple slip of paper underneath each of their doors is about to change their lives in a hundred different ways.

URGENT!!! Due to the current situation, building management has decided to impose a seven-day quarantine on all apartment buildings on London Lane.

With nowhere else to go…

Ethan and Charlotte wonder whether absence really does make the heart grow fonder when they end up on either side of a locked door.

A fierce debate over pineapple on pizza ignites a series of revelations about Zach and Serena’s four-year relationship.

Liv realizes rolling with the punches is sometimes much harder than it looks after her bridesmaids’ party goes off the rails, leaving the group at each other’s throats.

Isla and Danny’s new romance is put to the test as they jump ten steps ahead on the relationship timeline.

And Imogen and Nate’s one-night stand is about to get six do-overs they never really asked for—not awkward at all.

Through make ups, breakups, love-ins, and blowouts, friendships are tested as everyone scrambles to make it through the week unscathed. Amidst all the drama, one thing remains constant: life is full of surprises.

Beth Reekles is the author of The Kissing Booth series, which inspired the incredibly successful Netflix films. She first published The Kissing Booth on Wattpad in 2010, when she was just fifteen years old, and it accumulated almost twenty million reads before being published in 2012. Lockdown on London Lane is her tenth published book. Beth runs a blog where she talks about life as a twenty-something and offers writing advice. She’s a fan of movies, fan fiction, and musicals.

It's Laugh Out Loud Funny

Thank you BookishFirst for the first look and a special thanks to the author for writing such a...

Laughter is the Best Medicine

The beginning of this book is hilarious. The first chapter starts with Imogen trying to sneak...

Fun premise for a light book

This book stretches the idea of what a reasonable quarantine would look like pretty far past...

This is a quirky, funny novel about the issues that a set of apartment dwellers face when they...

For such a heavy topic, this sounds like an entertaining read with a touch of perennial questions...