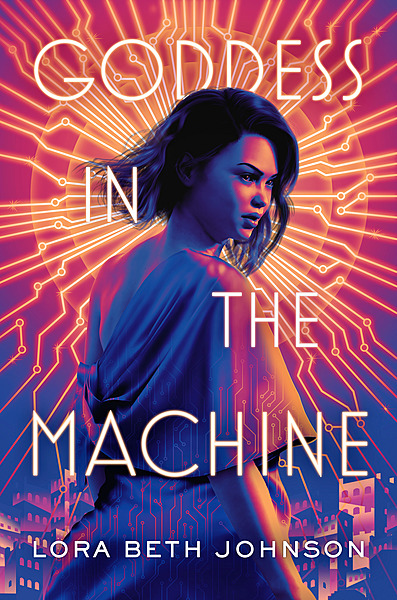 A smart, thrilling sci-fi adventure, perfect for fans of Renegades and Aurora Rising.

Goddess in the Machine

Andra wakes up from a cryogenic sleep 1,000 years later than she was supposed to, forcing her to team up with an exiled prince to navigate an unfamiliar planet.

When Andra wakes up, she's drowning.

Not only that, but she's in a hot, dirty cave, it's the year 3102, and everyone keeps calling her Goddess. When Andra went into a cryonic sleep for a trip across the galaxy, she expected to wake up in a hundred years, not a thousand. Worst of all, the rest of the colonists--including her family and friends--are dead. They died centuries ago, and for some reason, their descendants think Andra's a deity. She knows she's nothing special, but she'll play along if it means she can figure out why she was left in stasis and how to get back to Earth.

Zhade, the exiled bastard prince of Eerensed, has other plans. Four years ago, the sleeping Goddess's glass coffin disappeared from the palace, and Zhade devoted himself to finding it. Now he's hoping the Goddess will be the key to taking his rightful place on the throne--if he can get her to play her part, that is. Because if his people realize she doesn't actually have the power to save their dying planet, they'll kill her.

With a vicious monarch on the throne and a city tearing apart at the seams, Zhade and Andra might never be able to unlock the mystery of her fate, let alone find a way to unseat the king, especially since Zhade hasn't exactly been forthcoming with Andra. And a thousand years from home, is there any way of knowing that Earth is better than the planet she's woken to?

“Johnson’s rich, intelligent world blends sci-fi elements with palace intrigue and swoon-worthy characters in a way that is wholly unique and utterly brilliant. This book will make you laugh, make you fall in love, and then it'll blow your mind.” —Emily Suvada, award-winning author of the Mortal Coil series

"Utterly inventive and unique, this story has more surprises in store for you than you can imagine." —Beth Revis, New York Times bestselling author of Across the Universe and Give the Dark My Love

As an only child, Lora Beth Johnson grew up telling herself stories and reading past her bedtime. She spent her adulthood collecting degrees, careers, and stamps in her passport before realizing her passion for creating fictional worlds. When she's not writing, she's teaching college English and learning new languages. She lives in Davidson, NC with her little roommate, Colocataire the Yorkipoo. Goddess in the Machine is her first book.

This was a great book... I enjoyed the writings of the author. The detail and story line were...

Loved this so much!

Woooowwwwiiee. I did not expect these twists and turns, and I feel like I should have! I was...

First of all, that cover! The artwork is gorgeous! Now onto the story--I loved it. The story...

This story starts of as abruptly for the reader as it does for our main character, Andra. The...

Love Science Fiction, so would LOVE to read this!

I really LOVE science fiction, so I would LOVE to read this book! I love the mystery of finding...

This book felt like a cross between "Across the Universe" by Beth Revis and the Chaos Walking...