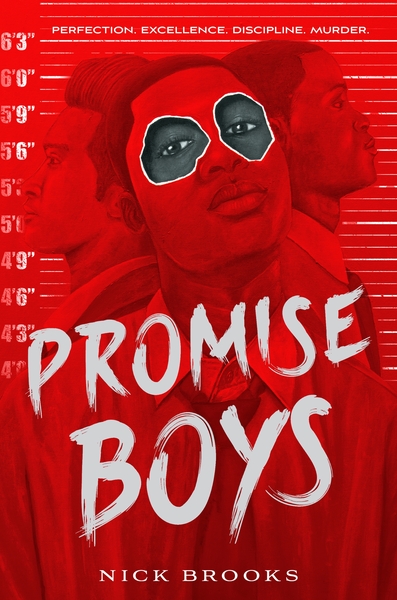 The Hate U Give meets One of Us Is Lying in Nick Brooks's Promise Boys, a trailblazing, blockbuster YA mystery about three teen boys of color who must investigate their principal’s murder to clear their own names—for fans of Jason Reynolds, Angie Thomas, and Karen McManus.

The Urban Promise Prep School vows to turn boys into men. As students, J.B., Ramón, and Trey are forced to follow the prestigious "program's" strict rules. Extreme discipline, they’ve been told, is what it takes to be college bound, to avoid the fates of many men in their neighborhoods. This, the Principal Moore Method, supposedly saves lives.

But when Moore ends up murdered and the cops come sniffing around, the trio emerges as the case's prime suspects. With all three maintaining their innocence, they must band together to track down the real killer before they are arrested. But is the true culprit hiding among them?

"A brilliant pulls-no-punches mystery with bruised hearts at its core."
—Adam Silvera, #1 New York Times bestselling author of They Both Die at the End

"Thrilling, captivating, and blade-sharp. Promise Boys will stay with you long after the last page."
—Karen M. McManus, #1 New York Times bestselling author of One of Us Is Lying

Nick Brooks is an author and award-winning filmmaker from Washington, DC. He is a 2020 graduate of USC's TV and Film Production program. His short film, Hoop Dreamin', earned him the George Lucas Scholar Award and was a finalist in the Forbes 30 Under 30 Film Fest. He is currently in development for his first feature film, We Were Born Kings, with Mandalay Pictures. Before becoming a filmmaker, Nick was an educator working with at-risk youth and many of his stories are colored by his experiences with the children and families of his community. He is also the author of Nothing Interesting Ever Happens to Ethan Fairmont.