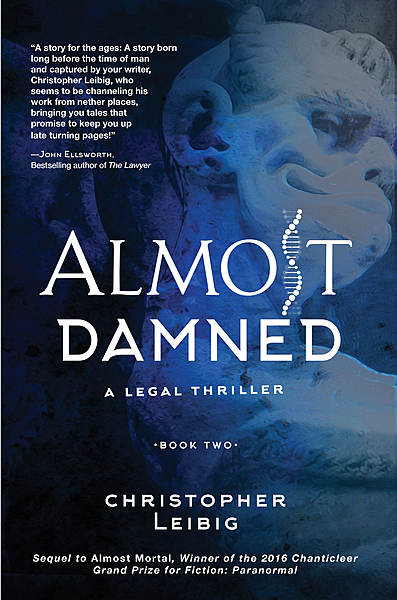 Defense Attorney Samson Young never thought he would one day have to sue the higher powers, but when mystifying DNA evidence points to crimes by other-worldly beings he may not have a choice….in this Lost meets The Devil’s Advocate meets A Time To Kill thriller an apopolytic conflict awaits, one that will one that will bring the planets's forces of evil to their knees.

"A story for the ages: A story born long before the time of man and captured by your writer, Christopher Leibig, who seems to be channeling his work from nether places, bringing you tales that promise to keep you up late turning pages!" —John Ellsworth, bestselling author of The Lawyer

Defense attorney Samson Young has an uncanny ability to get even the so-called worst clients off the hook, as he ably demonstrated in Almost Mortal. In Almost Damned, little does he know that his most challenging cases are all leading up to one monumental trial, in which he will lay before the Court the visceral complexities of good vs. evil.

As Sam navigates his cases in Bennett County, it becomes increasingly apparent that his clients – old and new - are surprisingly interconnected, especially when old clients rise from the dead. Literally. He and his office are besieged by death threats and mysterious invitations, each one a clue that compels him to dig deeper into his own past, including the supposed death of his mother and the religion he had long since left behind. With each new discovery, Sam leads himself and his team into a nether world, in an attempt to bring redemption to his toughest clients of all - the fallen angels who have been walking the earth for centuries, unable to find peace.

This is a sequel to Almost Mortal, but also works well as a standalone.

"From a capital case with an outrageous defense to what is undoubtedly the trial of the millennia, Almost Damned is full of characters who would have been just as recognizable in the 11th century as they are in the 21st" —Sean Jenan, author of Cipher

Christopher Leibig is a full-time criminal defense attorney and novelist. He regularly handles high-profile criminal cases throughout Virginia and the DC area. He has presented at numerous legal symposia in the U.S., Europe, and the Caribbean, and appears frequently as a legal expert in the major news media, including CNN, The New York Times, The Washington Post, Fox and NPR.

Chris’s previous novels have been recognized for numerous awards, including the Chanticleer International Book Awards Grand Prize for Paranormal Fiction in 2017, the Pencraft Award for Best Legal Thriller in 2017 and 2019, and the Next Generation Independent Book Award for Religious Fiction in 2016 and Best Fiction E-Book in 2018.

Review of Chris Liebig’s book; Almost Damned, by Steve Carlson It was the...

This is a one-of-a-kind legal thriller. As Sam Young defends both mortals and fallen angels, the...

This book keeps me on the edge of my seat. This book is suspenseful and mysterious. The choice of...

Ok what in the world is this cover? I mean, it’s so outrageous that I want to read it even more!...

Really fun, fast paced writing. It drew me in immediately with a mysterious prologue, and then...

I've dabbled in enough legal thrillers to know how to read them. They are very interesting when...