Max Gladstone is the author of the Hugo-nominated Craft Sequence, which Patrick Rothfuss called “stupefyingly good.” The sixth book, Ruin of Angels, will be released September 2019. Max’s interactive mobile game Choice of the Deathless was nominated for the XYZZY Award, and his critically acclaimed short fiction has appeared on Tor.com and in Uncanny Magazine, and in anthologies such as XO Orpheus: Fifty New Myths and The Starlit Wood: New Fairy Tales. John Crowley described Max as “a true star of twenty first century fantasy.” Max has sung in Carnegie Hall and was once thrown from a horse in Mongolia. 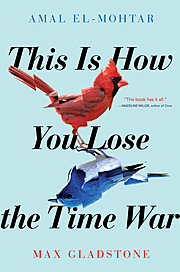 This Is How You Lose the Time War