K.J. Howe is the executive director of ThrillerFest, the annual conference of International Thriller Writers. A three-time Daphne du Maurier Award winner, she completed her MA in Writing Popular Fiction at Seton Hill University. She is an avid traveler who has raced camels in Jordan, surfed in Hawaii, and dove with the great whites in South Africa. She became fascinated by the kidnap and ransom (K&R) world after meeting Peter Moore, a British computer consultant who became the longest-held hostage in Iraq and the only person to survive of the five men who were taken that day. She is the author of The Freedom Broker. 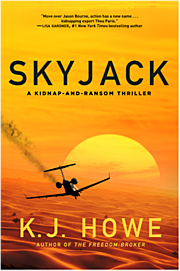