Erin French is the owner and chef of The Lost Kitchen, a 40-seat restaurant in Freedom, Maine, that was recently named one TIME Magazine’s World’s Greatest Places and one of "12 Restaurants Worth Traveling Across the World to Experience" by Bloomberg. A born-and-raised native of Maine, she learned early the simple pleasures of thoughtful food and the importance of gathering for a meal. Her love of sharing Maine and its delicious heritage with curious dinner guests and new friends alike has garnered attention in outlets such as The New York Times (her piece was one of the ten most read articles in the food section the year it was published), Martha Stewart Living, Wall Street Journal, Boston Globe, and Food & Wine. She has been invited to share her story on NPR’s All Things Considered, The Chew, CBS This Morning, and The Today Show. Erin was featured in a short film made by Tastemade in partnership with L. L. Bean, which won a James Beard Award, and The Lost Kitchen Cookbook has been named one of the best cookbooks by The Washington Post, Vogue.com, and Remodelista and was nominated for a James Beard Foundation Award. 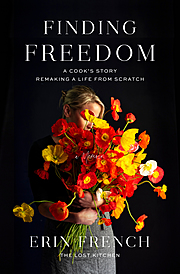