Mike Hayes is the former Commanding Officer of SEAL Team TWO, leading a two thousand–person Special Operations Task Force in Southeastern Afghanistan. In addition to a twenty-year career as a SEAL, Mike was a White House Fellow, served two years as Director of Defense Policy and Strategy at the National Security Council, and has worked directly with both Presidents George W. Bush and Barack Obama. Beyond his military and governmental service, Mike is currently the Chief Digital Transformation Officer at VMware. His military decorations include the Bronze Star for valor in combat in Iraq, a Bronze Star for Afghanistan, and the Defense Superior Service Medal from the White House. Hayes is a lifetime member of the Council on Foreign Relations, a member of the board of directors of Immuta, a data governance company, and of the National Medal of Honor Museum, and a senior advisor to Inherent Group, an impact investment firm. 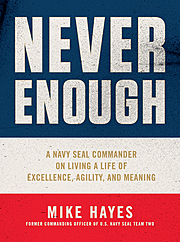