Marshall Ross is an American science fiction author. His first work, Lost Arrow, Book I of The Kalelah Series, explores the plight of an interstellar ark in the midst of an existential crises. Much of his writing career has been spent in advertising, where he’s written and creative directed award-winning campaigns for some of the world’s most beloved brands. He shuttles between his homes in Evanston, Illinois, New Buffalo, Michigan and, thanks to the demands of work, hotels in Europe.

His favorite book of all time is J. D. Salinger’s The Catcher in the Rye.

His hobby is proving true the adage that a good house is never finished. And this, like all hobbies of husbands, annoys his wife. 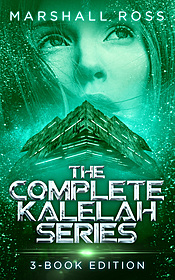