James Ramos (he/they) is a nonbinary, unapologetically dorky Minnesota native who now calls Arizona home. Weaned on a steady diet of science-fiction, comic books, and classic literature, James wrote his first story at eight years old and hasn’t stopped writing them since. He counts Jane Austen and Frank Herbert as his biggest literary influences and believes in the unifying power of the written word. James is passionate about storytelling, particularly stories that give voice to marginalized people, especially those within the LGBTQ+ community and people of color. When he isn’t writing he can usually be found cosplaying with his friends or surrounded by his amazing family of cats. 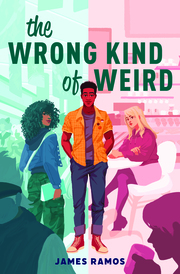 The Wrong Kind of Weird