Chris M. Arnone was weaned on comic books and Hardy Boys novels, finding his first literary love in Lord of the Flies, though his longest-lasting is a love for Ray Bradbury. He reads and writes nerdy fiction in equal parts with literary fiction and poetry these days, but his imagination still leans toward the magical. Chris’ debut novel, The Hermes Protocol, is forthcoming from Castle Bridge Media in early 2023. He is a contributor for Book Riot. He is represented by Katie Salvo at Metamorphosis Literary Agency. He has an MFA in Creative Writing from the University of Missouri – Kansas City. He also performs on many stages in Kansas City, where he lives with his wife Christy, and their cats. 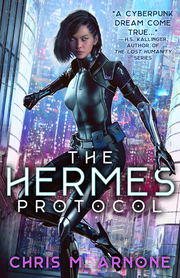