Alexis Schaitkin’s short stories and essays have appeared in Ecotone, Southwest Review, The Southern Review, The New York Times, and elsewhere. Her fiction has been anthologized in The Best American Short Stories and The Best American Nonrequired Reading. She received her MFA in fiction from the University of Virginia, where she was a Henry Hoyns Fellow. She lives in Williamstown, Massachusetts, with her husband and son. Saint X is her debut novel. 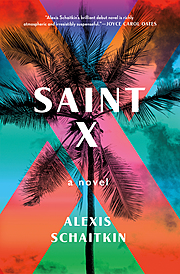